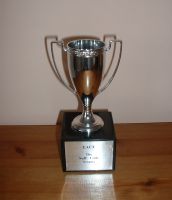 The 6th annual Anderson Shield was staged this year at Colchester with five competing counties. Unfortunately as Suffolk were unable to raise a team a slightly different formula was used and an extra handicap competition introduced so that no players were left sitting idle for any time.

The new re-worked schedule worked extremely well and resulted in a very close finish with Herts, Cambs and Norfolk all vying for the winning position. However, over the weekend the Hertfordshire team proved the most consistent and narrowly took away the trophy for the third consecutive year. This was celebrated by a fly-past from the 'Red Arrows'. Quite how they pulled that off one can only wonder.

Running alongside the main competition for those pairs not currently involved in the main event was a handicap tournament for the 'Naff-Little Trophy', a recycled Belgian Indoors Trophy from the manager's trophy cabinet. However, despite a valiant attempt to fob this off on some poor unsuspecting county, he must have forgot to mention this to his Essex team-mates who seemed to make it their mission that this was not going to leave its home. "Nice try Colin".

Another successful tournament and our thanks go to the Colchester Club for making their excellent facilities available, and particularly to the manager Colin Hemming for his inventive creative work in coming up with an alternative playing schedule at the last moment to save the day. Thanks also go to Jim Potter for agreeing to act as ROT.

See also details of the national Inter-Counties Championship which take place at the same time as the Anderson Shield tournament.