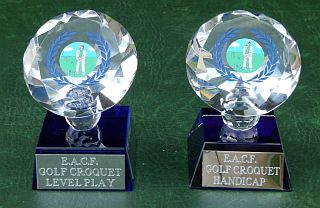 On what turned out to be a perfect sunny day ideal for croquet, 20 competitors from 10 clubs all arrived early at the Newport Club on Sunday 30th June, so that the Manager had a bit of a problem finding a parking place. However, never one to look a gift horse in the mouth and taking advantage of the situation, the day's play managed to start 10 minutes early. Split equally into two groups, one Level Play and the other Handicap, on lawns that were in excellent condition and very evenly paced it appeared to be a joy to play on.

Because of the large entry and the fact that only three lawns were available and each player was required to play 5 games (even so due to quick play four of the players managed to complete 6), the Manager had to revert to the Hands-Irwin Egyptian Format where, if possible, winners played winners and losers played losers so that a clear winner would emerge in each group at the end of the day.

By the lunch break in which all had completed 3 games, a clear leader had appeared in each group. In the Level Play group David Crawford on a rating index of 115 was clearly in front followed by a pack of three comprising Peter Ross, Dick Strover and Jeff Race on 105. Not to be outdone, David Frost and Chris Sheen were still in contention on 104; whilst in the Handicap, Hugh Brown was also surging ahead also on a rating of 115. He too was being closely shadowed by Tony Elliot on 106, with David Ball and Roy Darling on 105 and Derek Cole with 104.

After the lunch break in the Level Play David, Peter and Jeff continued to show their form with all three picking up further wins in their next games. However, Dick and Chris by losing theirs unfortunately dropped out of the running. Meanwhile in the Handicap, Hugh appeared to lose his form completely losing both his next two games, whilst both Tony and David kept up their challenge by recording wins. Also Roy and Derek also fell by the wayside, both recording losses.

David Ball - Did it jump?

By the end of the afternoon arriving at the final round in the Level Play it looked as if David Crawford was unassailable on a rating of 119, the nearest player being Jeff Race on 110. Jeff had previously lost to David and therefore they were not able to play each other to determine an outright winner. However, when David lost to Peter an unexpected opening presented itself, and Jeff not being one to miss an opportunity, quite out of the blue by beating Jason emerged as a very surprised winner. In the Handicap group things were a lot more clear when a final round decider emerged between David and Tony to decide the outcome. David just managed to win a very tight game 5/4 running out of time.