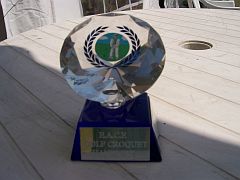 Entries received this year totalled 12 from 5 clubs, and despite one no-show due to a misunderstanding, Irene Davies who had travelled with the Leighton Linslade contingent and fortunately was in possession of her mallet undertook to fill the this vacancy. The format consisted of two blocks of 6 who played each other, with the winners of each block proceeding to a final play-off to determine the overall winner.

In Block 'A' Carole Carter of the home club just ran out the winner 4/5, one game win over her nearest rival Hugh Brown from the (Unity) club Sudbury; whilst in Block 'B' Les Heard of Northampton made a clean sweep winning all his 5 games despite a valiant challenge by Colin Crawford, again from the Unity Club.

In the final round Les remained in good form and quickly won the game by 7/3, running out the winner taking the new trophy to Northampton.

The whole day's play was conducted under a very hot sun, and even though the games were played under a 40 minute time-limit, very few went to time. This allowed the Manager to grant long rests between rounds to counter the effects of the oppressive heat.

At the end of play all players were able to enjoy the hospitality of the home club who provided a magnificent and most welcome afternoon tea before departure.

Report and photos by Terrey Sparks