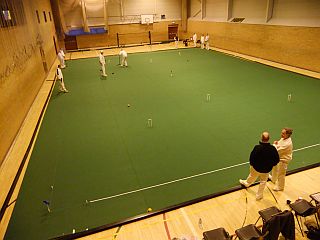 The indoor carpet made its first appearance in the Eastern Region on the weekend of 7th/8th November 1987 at Clacton-on-Sea. The Organiser and Manager was Judy Anderson. The tournament was sponsored by Townsend Croquet and included a special guest appearance by Henry Cooper sponsoring Pipe Smoking, who made the presentations to the winning competitors.

On the Saturday the EACF team comprising Debbie Cornelius, John Walters, Paul Elliot and John Hobbs played a representative side from the S.E. Region which they won 3 - 0. On the Sunday the EACF comprising Robert Fulford, Fiona McCoig, Adrian Kirby and Graham Budd lost 1 - 3 against a side from the Southern Region.

The next event to be staged was at Soham on 14th/15th January 1989, which was an Invitation Event of 8 top players. This was managed and organised by Albert Lawrence and John Walters. The weekend attracted 100 paying spectators.

On 16th/17th December 1989 at Soham prior to the GB side departing to New Zealand for the MacRobertson Shield, Mark Avery and Robert Fulford (GB) played a representative (EA) side consisting of Chris Clarke, Steve Cormish, Debbie Cornelius, Martin French, Duncan Reeve and John Walters. The GB side won 10 - 8. The event was organised and managed by John Walters.

During 1990 the slow carpet was transported to The Bedford Modern School where it was used for coaching by Nigel Gray and Hugh Williams. This was organised by Andrew Wilson.

The carpet then remained in storage until February 1991 when the first EACF weekend club tournament was staged at The Soham Sports Centre. This venue alternated with Lynnsport at King's Lynn until 1994 when it became too expensive to cover the moving costs. Following an agreement with the management of the Sports Centre to store the carpet free, the CA agreed to waive its hire fee. The carpet has been in regular use during the winter months by the EACF since then.

In order to cover expenses we have to allow as many people as possible to play during a weekend, so we play a version of Short Croquet double-banked doubles with time clocks. Each weekend usually comprises 8 club teams each day using a version of the short croquet rules that has developed over time to suit the indoor playing conditions, though exceptionally we can play with 7, 9 or even 10 teams in a day. The game has proved immensely popular and is particularly good for the social mixing of Clubs and players of all standards.

To take into account the special circumstances of indoor play the members of the Ipswich Club drew up a set of rules in 1992, which were adopted. These rules were subsequently up-dated in 1995 by Don Cornelius. As the standard of play has continued to improve they have been slightly amended several times, mainly by increasing the time penalties to restrict the more senior players.